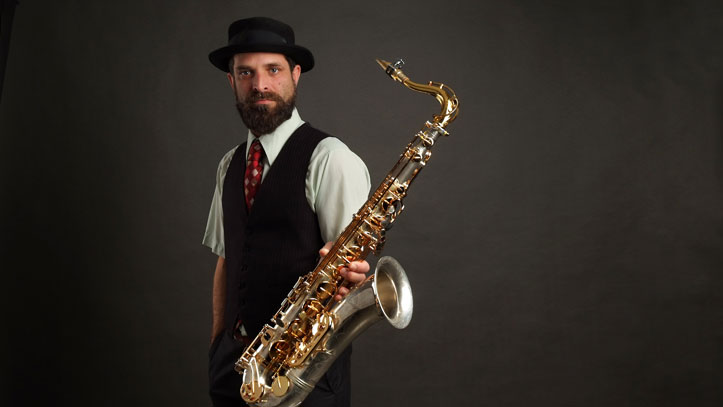 Niko Halfmann was born in Freiburg at 1973. He grew up in Krefeld, back to Freiburg to study saxophone at the Jazz- and Rock School, then stayed there, in the metropolis of Breisgau.

Niko has composed for the Cargo Theater Freiburg, Bewegungs Art Freiburg, Roland A. O. Köhler and developed the cabaret “Als Kind war ich komisch – heute bin ich okay” with Oliver Genzow.
Since 2011 Niko has been playing with the ska and rock band “FBI”, “VibraTon” and his own band “Niko Cocktail AgoGo” . Numerous gigs have taken Niko to festivals in Montreaux, Milan, Chambery, Siena, Strasbourg, Basel, Wiesbaden, Cologne and Munich, as well as on tours through France, Italy, Switzerland, Austria and Thailand.

Alongside his concert work, Niko also teaches saxophone, he wish to advice for aspiring talents, “Stay flexible, keep your ears open to the pulse of the times and don’t let go of your inner explorer. Develop and expand your ideas to find your own sound. Scales and chords are all very well, but it is all about sound, sound, sound – just keep blowing!”

Niko described himself as “a livewire full of unusual ideas pursuing the perfect sound or simply a punk-jazz musician” . Other than a nice meal or good food, saxophone is everything to him. Niko joined Antigua’s family from 2012 and is really happy with his Pro-One alto saxophone AS6200VLQ and Power bell tenor saxophone TS4240SL.