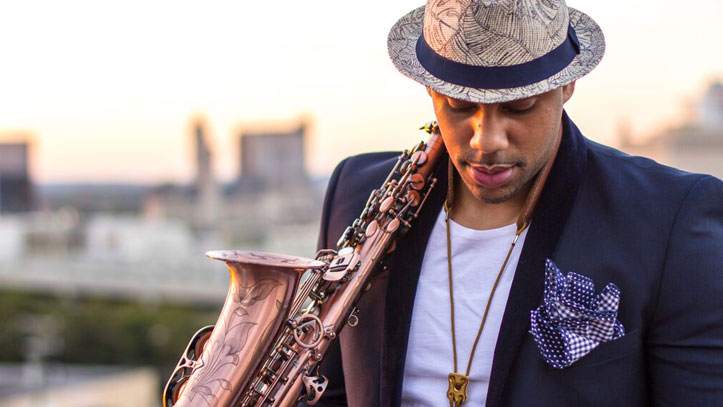 Marcus Johnson is a saxophonist quickly rising through the ranks of the New York City jazz scene.

As a product of the great musical city of Nashville, Tennessee, Marcus developed his passion for music at a young age by simply listening to his surroundings. Nashville’s wide range of musical styles and traditions inspired him to develop a unique sound that draws from jazz, R&B, funk, blues, soul and gospel. This contemporary jazz artist also comes from a musical family and found great joy listening to family members who were very influential in his playing.

Marcus graduated from Tennessee State University where he achieved degrees in both music and economics. Throughout his time in college, Marcus made his way around the local club circuit of Nashville with his band Nu Vibe. Marcus’ multiple interests and his drive to succeed led him to move to New York City where he works in the financial services industry and lives out his passion of playing music. While in NYC, he has quickly expanded his musical network and most recently recorded with Producer Elite who has produced for hip hop artists Jadakiss, Nas, Common and Grammy nominee for “Best New Artist” J. Cole. He can also be found playing throughout New York’s boroughs with artists such as Cheryl Pepsi Riley, the Nate Jones Band, UGF music group and Many others. Marcus has been on stage with Elle Varner, Raheem Devaughn, Snarky Puppy, Bradford Marsalis, Roy Hargrove, Hezekiah Walker, Bobby Jones Gospel and Many BET Matters Artist.