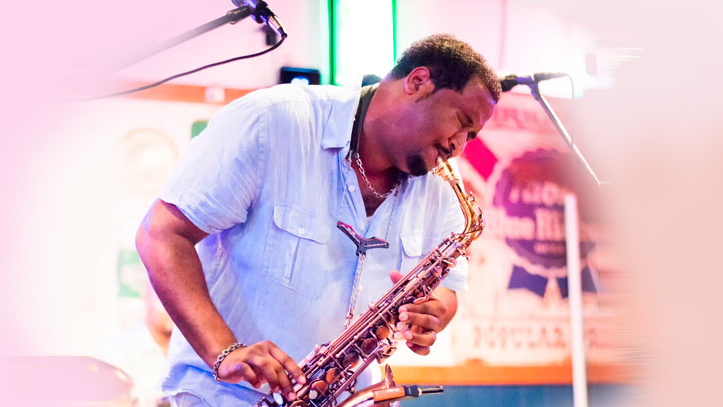 Considering the impact his music and powerful saxophone vibe has had on fans in his hometown of Columbia, South Carolina and beyond these past years, Dante Lewis chose the perfect name for the party band he launched his professional career with : Vision.

After several years of delighting audiences at private functions, the multi-talented musician renamed his ensemble the Dante Lewis Vision Band and began headlining on the local club scene. Renowned music producer Byron Counts became a big fan and began filling in occasionally on keyboards. Counts, who has worked with, among others, CeCe Peniston, also convinced Lewis to branch out and become a recording artist – a vision fulfilled with the release of the saxman’s smooth urban jazz debut album that truly lives up to its title, Set The Mood.

Driven by the philosophy “groove comes first” and drawing soul inspiration from his chief influences Kirk Whalum and Grover Washington, Jr. Lewis fashions an inviting mix of sensual and funky on a set that blends a batch of uniquely arranged classic R&B cover songs, three original tunes penned by Count and a title track written by Rod King – who sets the mood with a dreamy ambience behind one of Lewis’ most heartfelt performances. It’s a testament to Count’s writing and production and Lewis’ rich, emotional horn style that the originals feel right at home alongside legendary songs by Luther Vandross, Al Green and Stevie Wonder. Gospel music has been a part of Lewis’ life since he began playing at age 12, and the saxman graciously includes the beautiful closing tune “Only What You Do For Christ Will Last” to honor that part of his musical soul. That song is the perfect set up for Lewis’ recently released, critically acclaimed debut gospel jazz album Song of a Servant, which features vocals by many of the saxophonist’s friends, including the pastor at his congregation, Bethlehem Baptist Church.

Lewis has already been featured in Lux Millionaire Magazine, Columbia Metropolitan Magazine and California’s “Urban Scene” Magazine as a featured hot new artist. “Like most musicians, my goal is always to touch as many people as possible through my playing and performing, ” he says. “Byron was instrumental in helping me see the possibilities of a career in urban jazz that extends beyond my success as a regional artist. He saw the way I interact with the crowds in Columbia and said he could see me doing this on a national level. We set out to create a top-notch debut recording, and the music on Set the Mood exceeds all expectations I had going into the recording. It’s exciting to now be a full-fledged recording artist and I’m thrilled to be part of the smooth jazz world. Kirk Whalum’s career is my inspiration, and I can see myself patterning a dual career in jazz and gospel after him. They cross over very easily.”