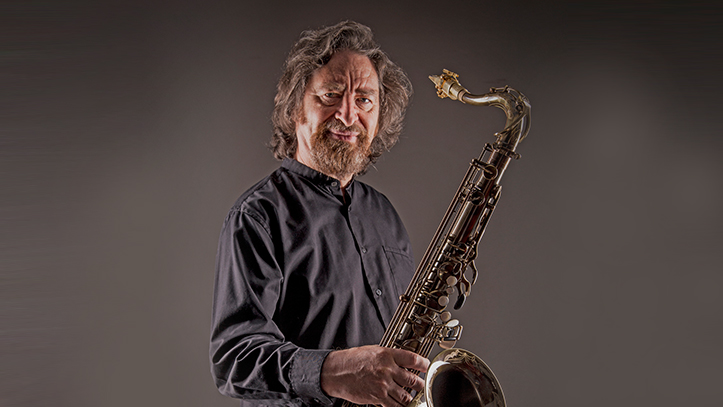 “I always was attracted by strong personalities, musicians like Jimmy Hendrix or Sonny Rollins. I need to feel the person, ask myself: is he talking to me?”

Born in Switzerland 1954, Daniel Guggenheim started to play recorder at the age of five and three years later to explore the keys of the piano. When he was thirteen, his interest in improvisation was born, at sixteen he played keyboard in a Pop group, to find finally his true love, the saxophone at the age of eighteen. He studied at the Swiss Jazz School in Bern, Switzerland, where he graduated in 1981. During that time he played in various groups and also led his own quartet. Like many young sax players he was influenced by the work of John Coltrane.

In search of new inspiration Guggenheim first went to Paris, later to Rio de Janeiro. There he played in jazz clubs and bars and in 1983 he met Hermeto Pascoal who he began rehearsing with regularly, two times a week. Learning and playing alongside this genius musician had a major influence on Guggenheim’s work. “In Rio I met a totally different mentality, music of another kind. Hermeto and his musicians created a total individual music, by giving their undivided attention to this work. Life and work are one; music starts to be a complete experience. When Hermeto composes or plays, he expresses his own identity.”

Back in Europe in autumn 1983 Guggenheim played as a street musician as well as with various rhythm and blues and soul bands. He finally settled in Frankfurt, Germany in 1985, where he became musical director of a soul band. 1988 Guggenheim met Hermeto again, who invited him to play some concerts with the Hermeto Pascoal Group in Germany. Meanwhile, thanks to his teaching job at the Frankfurt Musikwerkstatt, financially more secure he went back to jazz. He recorded his first CD “ Daniel Guggenheim Group”, with, among others, Jasper van´t Hof on piano, as a leader in 1990 and toured with different groups.

After the experiences in Rio and his decision to devote his musical life to jazz music, Daniel decided to go to the place where this music comes from, New York City. He stayed in NY for nine month in 1994/95. “In New York I felt this incredible musical energy right away. I started to work hard to find this energy in myself. In Europe life of musicians is, in a way, cozier. We do not have this pressure and energetic surrounding all the time. No wonder, that a lot of important input comes from New York, even if the music itself gets more respect in Europe.” In NY Guggenheim made strong and irreplaceable experiences by playing with Elvin Jones, Cecil McBee, Richie Beirach, George Mraz, Roy Hargrove a.m.o.

In autumn 2005 his new CD “traces of…” is being released (on Laika Records), that he recorded with his new quartet. On the piano is Peter Madsen, whom he met in NY and has worked with for several years. They have developed a deep musical friendship, which you can hear in this band. The great NY musicians Sean Smith (bass) and Gerald Cleaver (drums) complete the group.

After years of travel and search for a musical identity Guggenheim now presents himself as a mature musician, who has learned to express his experiences in a spontaneous way and interact with other musicians. Fascinating moments arise, where the flow of inspiration is totally free, and still based on tradition.

In 2007 Guggenheim sets up “The Hip”. Lover Man and other Standards are source material for new interpretations. Together with Ulf Kleiner (piano/rhodes), Hanns Höhn (bass) and Tobias Backhaus (drums) the band plays very groovy, individual and creative. A year later Guggenheim starts to tour regularly in Argentina with musician from the Buenos Aires jazzscene.

The group also records the CD “Birth of Indigo”. 2011 Guggenheim becomes a member of th “Grandsheiks” – playing the music of Frank Zappa. In this band he also playes keyboards.

2012 Tour in Europe with his “New York Quartet”. They record their second CD “Beyond Moments And Time” in coproduction with DRS2. Peter Madsen and Sean Smith still are in the band, Devin Gray is replacing Gerald Cleaver.