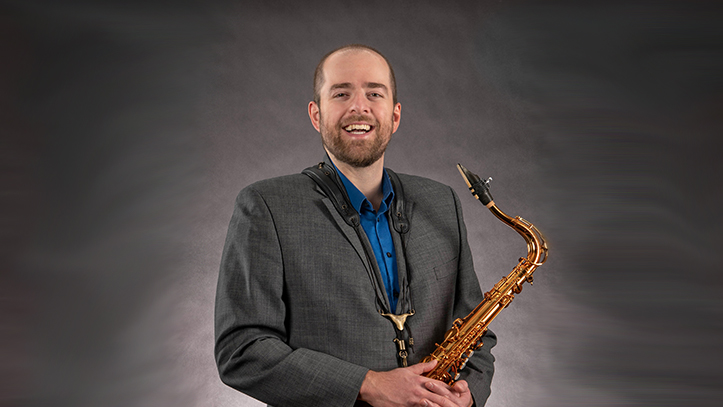 Jonathan Armstrong is a saxophonist, composer, and educator who serves as the Director of Jazz Studies at Idaho State University. He moved to Pocatello in 2015 after working as a professional musician in Los Angeles for nine years. Jonathan has a creative and dynamic career as a bandleader, performer, composer, and educator. He is also an endorsed artist for Antigua Winds, and plays Antigua Winds Pro One horns.

Jonathan established a reputation as a daring bandleader with three album releases of his original work. His debut Farewell (2013) is a five song suite for the Jon Armstrong Jazz Orchestra, a 23-piece large ensemble. The album Burnt Hibiscus (2016) is inspired by contemporary poetry and traditional Hindustani music played by a ten-piece chamber jazz ensemble. The album received widespread acclaim, most notably when it was listed as one of the best jazz releases of 2016 by national jazz critic Dave Sumner of Bird is the Worm who writes:

“The melodies provoke a simple, crisp lyricism… a quality the ensemble exploits to launch into intricate rhythmic passages and harmonic excursions that stretch far out from the song’s opening moments. Massively creative at both conception and conclusion, and one of the very best albums to come out in 2016. Perhaps, the very best.”

In 2020, Armstrong released a new album on Orenda Records. Featuring an outstanding sextet of L.A. musicians, Reabsorbexplores humans’ relationship with our own mortality with a journey from raging against the inevitable, to acceptance, towards transcendence, and the reabsorption of our spirit back into the universal consciousness of all life.

As a composer, Jonathan is passionate about collaborating with artists from other disciplines. In addition to writing for theater, dance, and film, he composes both instrumental and vocal music based on poetry. Jonathan uses text as an emotional springboard into a piece, and he often requests poets to write for a specific project. He scored the theatrical productions Exhibit A, Homo Economicus, and Record of Light; the dance performance Space Opera with the Heidi Duckler Dance Company; and he collaborated in making a film for his composition “Dream Has No Friend” with the company Producciones con Sal.

Armstrong has also composed numerous pieces for chamber ensembles and orchestra. In 2017 Jonathan was awarded a Quickprojects grant from the Idaho Commission on the Arts for his original just-intonation composition, “Gathering Resonance”.

He has taken this same philosophy to Idaho State University, where he is working to curate a professional music scene by setting up performing and recording collaborations for his student ensembles. Jonathan has designed and built a recording studio for ISU students and created a new Commercial Music degree. Incorporating the studio, the degree program, and his ensembles, Jonathan is developing an educational experience that prepares each student for a dynamic and successful career as a contemporary musician. He wins numerous arts grants and brings in world-class musicians to perform and record with ISU music students.

Jonathan hosts a regular radio show entitled Don’t Call it Jazz for the local NPR affiliate KISU. He adores spending time with his wife and daughter. He hikes, reads, and practices mindfulness.