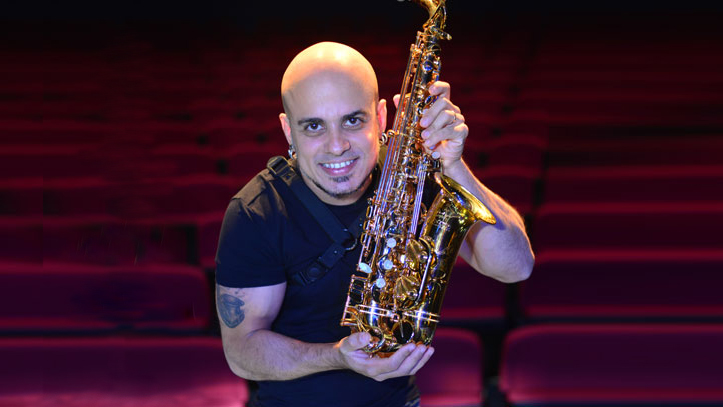 He began studied music at the age of five in Escolade and the Federal University of Bahia Music is where he studied the Music initiation and did all the basic courses. With the renowned teacher Elena Rodrigues – flutist of the Bahia Symphony Orchestra, Marcelus started the flute study at the age of nine. He had won three awards at the age of eleven with his gifted talent, competing with other young flutists, the First, the Revelation and the musicality of the Competition for Young Instrumentalists of Bahia “, promoted by UFBA in 1988. When he was 15 years old, Marcelus decided to devote himself to the saxophone studies and learning the keyboard by himself; with his enthusiasm and talent at music, he’s pursuing on becoming professional musician. At the same time, Marcelus was approved first in the UFBA entrance exam for the course of Composition and Conducting.

As a professional musician he had joined performances with several artists such as Olodum, Nando Borges, Netinho, Katie Guimma, Lui Muritiba, and many more; also includes instrumental worked with international drummer Mokhtar Samba, guitarist Jurandir Santana, the Orchestras Rumpillezz and Charanga, worked with drummer Marcio Dhiniz in Brazilian Root project and recorded the CD instrumental Drummer Beto Martins. He has recorded as an arranger and musician for Ivete Sangalo, Claudia Leite, Netinho, Love Scent, Harmonia do Samba, EVA band, Native pepper, Jammil, band Kiss, VoaDois, Gil, Dr. Barley, Chica-Faith, Elpidio Bastos, Lui Muritiba, Rapazzola, Mambolada, Noeme Bastos, Renato Fechine, Carlinhos Brown, who did Carnaval 2012 parallel the Banda Eva and many other artists and bands. As an arranger he participated in the DVD Bahian singer of great national impact, Ivete Sangalo, recorded in NYC / USA, the “Ivete Sangalo: Live at Madison Square Garden” making arrangements for the tracks “Where it begins” and “Qui Bele”, and five new songs CD Alexandre Peixe, among other projects. In addition, he joined the suit of DVD metals “Romantic Harmony” Harmony of the Samba group, where he made two arrangements for the new CD of the group, called “All over again.” Highlight in his career-scores its stake in Eva band – led by singer Saulo Fernandes – since 2003. In the band, besides acting as instrumentalist (saxophone and flute) also served as arranger and backing vocal. He recorded five albums and three DVDs entitled: “Eva 25 years,” “See high Listen Colorful “and” Place of Joy “, the first awarded Gold Record. In the last work of the band when Saulo still as a singer, called CNRT, he made editing audio and woodwind arrangements. For being in a band with national prominence throughout the country he participated in television programs, radio and internet and even includes tours in Europe and the United States. On advertising works such as jingles for Shopping Iguatemi, Nova Schin, vignette for TV Bahia and works with the Command S Audio, major advertising company.Marcelus works includes making woodwind arrangements for the prestigious Producer Dudu Borges. Currently he has just completed the new singer CD Saulo, acting as co – producer of the CD, and continues working as a musician in his band.

Marcelus is playing Antigua ProOne Alto Saxophone (AS6200VLQ). “I am very happy with this saxophone and really excited to make more videos playing with this amazing instrument!” said by Marcelus.

Next ProjectMMR with Antigua Winds at the 2017 NAMM Show